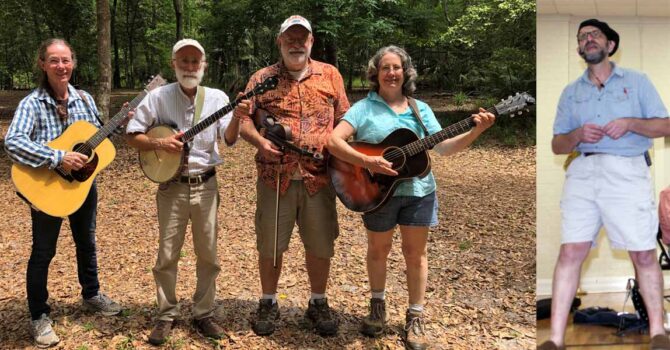 A real old-time Gainesville band, The Fish Camp Cutups, are returning to the stage to play for contra dancers and Gainesville caller Jonathan King on May 18th 2019.

Brent and Lloyd Baldwin were founding members of the original Bucksnort Barndance Band based in the Gainesville area in the mid-1970’s. They played for most of the GODS dances when the organization started around the same time. At that time, Brent played guitar and Lloyd played the fiddle. They were soon joined by guitarist Inslee Baldwin, who married Brent.

Lloyd left the band in 1980 for career pursuits, but the Bucksnorts kept playing into the 1990’s. They toured Russia with Gainesville’s Cross Creek Cloggers in 1985. Brent transitioned from guitar to banjo after the departures of Dwight Rogers and Gail Gillespie. In 1992, Brent and Inslee took a break from playing music due to career demands. The break lasted until 2018, when they picked up their instruments again and started making up for lost time.

Lloyd kept on playing his fiddle and banjo through various career moves and bands in Alabama and Florida. He and his friends are regular performers at the annual Florida Folk Festival. Guitarist Marion Lasley, a Gainesville native, began playing in 1977 when she lived in North Carolina. She has played for dances with several bands since her return to Florida in 1984. She and Lloyd have been making music together since 1992.

The youngest member is Jarrod Ridgway, an accomplished fiddler from Deland. He is interested in fiddle tunes from the Southern string band tradition, especially those that were played in Florida in former years. Jarrod has placed as high as second in the Florida State Fiddle Contest.
– – – – – – – – – – – – – – – –

06:45 pm – 07:00 pm — Contra workshop for beginners
(New contra dancers, & those wishing to review their dance moves
or help others to do so, please attend this pre-dance contra lesson.)

Dancers ages 15 & under get in FREE when accompanied by an adult.

Snacks at the break are provided by dancers. If you snack, bring one to share & a water bottle to help our planet.

Parking is in the lot across the street & in marked spaces on adjacent streets.